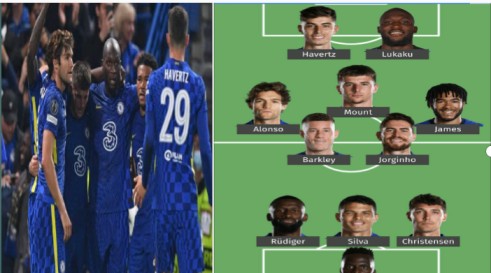 The English Premier League giants Chelsea would be hoping to get all the maximum three points when they travel away to face Russian side Zenit Saint Petersburg in a crunch encounter between both clubs.

The Blues are the huge favourites to emerge victorious due to their previous away records against Zenit Saint Petersburg.

The West London based club Chelsea have won four UCL matches and they have amassed twelve points so far this season.

The West London based club Chelsea have scored 10 goals in the UCL this season and they have also conceded 1 goal this season.

An emphatic victory for Chelsea will solidify their top position on their UCL standings ahead of Juventus, Zenit Saint Petersburg and Malmo.

The German and Chelsea head coach Thomas Tuchel is expected to name a strong lineup for their crucial UCL match against Zenit Saint Petersburg. The Chelsea and German tactician Thomas Tuchel could line up his team by using two tactical formations this midweek.

Let’s take a look at some possible lineups that could defeat Zenit Saint Petersburg this midweek; The German and Chelsea head coach Thomas Tuchel could line up his team by using a 3-4-3 formation in which Edouard Mendy would be the goalkeeper, Antonio Rudiger, Thiago Silva and Andreas Christensen as center backs, Marcos Alonso and Reece James as wing backs, Ruben Loftus-Cheek and Jorginho as central midfielders, Callum Hudson-Odoi and Mason Mount as wingers, Romelu Lukaku as the lone striker. The Chelsea tactician Thomas Tuchel could also line up his team by using a 3-4-1-2 formation in which Edouard Mendy would be in between the sticks, Thiago Silva, Andreas Christensen and Antonio Rudiger as center backs, Marcos Alonso and Reece James as wing backs, Ross Barkley and Jorginho as central midfielders, Mason Mount as the lone attacking midfielder, Kai Havertz and Romelu Lukaku as the center forwards.