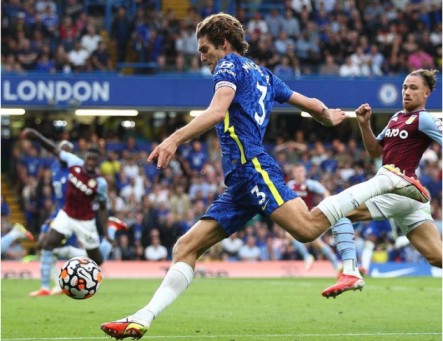 The case of Matteo Kovacic remains a headache for Chelsea manager Thomas Tuchel. The Croat has been one of Chelsea’s best performers this season and his best form returned when Ngolo Kante was out injured few weeks ago. With Kante now back and fully fit, it remains to be seen what the future holds for Kovacic. Will he return to the bench, or will he play alongside Jorginho and Kante benched? Ti’s question can only be answered by Tuchel. But with what we saw last weekend, Tuchel could choose to start all 3 midfielders, Kante, Jorginho and Kovacic now that Mason Mount is injured and out of the Man City clash. Let’s wait and see. Coming off the back of an impressive display against Aston Villa in the Carabao Cup few days ago, Chilwell worked hard in training yesterday. The 25 year old has seen first team chances hard to come by this season due to the immaculate form of Marcus Alonso but despite that, he still performs at his best in training. Against Man City, it’s highly unlikely that Ben Chilwell will be chosen ahead of Marcus Alonso. The last time Chelsea faced City, Chilwell was a starter in that game and performed excellently well. Now, the reverse is the case, unfortunately. Good ol’ Kepa, the Chelsea man keeps giving 1000% each time he’s called on by Thomas Tuchel but the presence of Edouard Mendy keeps making it harder for him to get a regular taste of first team action for Chelsea. In training, Kepa is arguably the best Chelsea goalkeeper around but Tuchel seems to trust Mendy more because the Senegalese deals with presure better. Kepa’s level still hasn’t dropped though and it seems a matter of time before he starts sharing the starting role with Mendy. Man City will be a tailor made game for Mendy due to the intensity of Pep Guardiola’s side, so Kepa would sit this one out.

The rest of the photos from Chelsea’s training session yesterday…