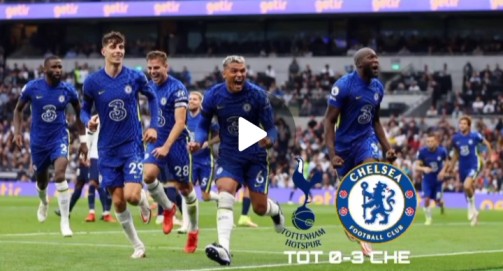 Without a doubt, Chelsea are now unstoppable in all competitions this season, as they have been buzzing and making waves in 2021-2022. The Blues narrowly won against Aston Villa on penalties yesterday, and they have qualified for the next round of the Carabao Cup, which means they will face Southampton in the next phase of the competition.

As usual, the Lions gave the Thomas Tuchel’s men a tough time at Stamford Bridge last night. However, the German manager subdued their tactics, having won 4-3 during the penalty shoot-out. Apparently, Chelsea are now getting better and stronger on a daily basis. Of course, the 2021-2022 campaign may come easily for the Blues, because they are ready to standout in all competitions.

Meanwhile, there are two tactical tweaks Thomas Tuchel used against Aston Villa, which he should repeat on Saturday when they face Manchester City, as regards their Premier League fixtures. However, the Blues shared points 1-1 yesterday, but these two tactics can subdue the Pep Guardiola’s men in all positions on the pitch.

Potentially, the Sky Blues are more like Chelsea, as they are well-equipped from the defense to the front. Having said that, the Spanish manager won’t accept a fourth defeat from the German gaffer, so he’s going to make sure he defeats the Thomas Tuchel’s men this weekend. But, the West London club can still continue their unbeaten streak in the Premier League, if they use these two tactical patterns on Saturday.

Firstly, the Blues gaffer should repeat the 3-5-2 formation, with Timo Werner and Romelu Lukaku as double strikers. Obviously, Aston Villa were very balanced and composed at the back yesterday, having seen their display defensively. However, the German forward managed to register one goal with his head. Having said that, it won’t be easy for Chelsea to break Manchester City’s defense line on Saturday, but the Thomas Tuchel’s men should be able to penetrate very well, if Werner dazzles alongside Lukaku in the front. Chelsea had a total of 18 goal attempts last night, of which they had 4 in the first-half and 14 in the second-half. As a result of that, the combination of the two forwards will definitely frustrate the Pep Guardiola’s men at the back, because Timo will focus on using his running skills to beat the defenders, while Romelu will be in position to do what he usually does best. The likes of Ruben Dias, John Stones, Kyle Walker and the rest won’t go easy on Chelsea this Saturday, but the formation 3-5-2 can dismantle their plans.

Secondly, Ben Chilwell and Callum Hudson-Odoi should re-run their wide plays again. In all fairness, the two English players were fantastic in attacking and defending yesterday. Of course, they both showed enough reasons why they should start against the Pep Guardiola’s men this weekend. Obviously, Chilwell and Hudson-Odoi played as wing-backs against Aston Villa last night, but they dazzled widely in front, because they had the centre-backs to cover up for them. Chelsea need to be dangerous and merciless in attack on Saturday, if they really want to win against Manchester City. Both Callum and Ben completed several take-ons at Stamford Bridge, which means they have the ability to repeat the same playing styles this weekend. With Recce James’s suspension, Hudson-Odoi can play from the right-wing-back position, while Chilwell replaces Marcos Alonso at the left-back, due to his ability to dribble and defend at the same time.

Simply put, Chelsea should repeat the tactical twits they used against Aston Villa yesterday, so as to be able to defeat Manchester City on Saturday. With that being said, Thomas Tuchel should repeat the 3-5-2 formation, with Timo Werner and Romelu Lukaku pairing together in the front, while Callum and Ben play widely as usual.